It was a good one! I was able to ski a lot… it felt like this magic window of time where Mother Nature delivered an epic winter and my kids weren’t quite old enough to want to hit the magic carpet every day. Here’s a quick edit I put together with some of the highlights!

Wow, what a season in the Sierra Nevada – it started snowing in January and really didn’t stop until March 6th. I skied my first groomer of 2017 in mid-March, that tells you something! A season like this has left me conflicted so many times. Ski powder or hang out with the triplets, ski powder or work, ski powder at the resort or in the backcountry… as a friend put it… Tahoe people problems.

We got a lot of snow this year!

The triplets love playing in the snow too, but I wonder if they think this winter is normal

Yesterday I skied “the Cross” on Mt. Tallac – the South Shore’s gem of a mountain. There are so many lines on the Cross right now. I had gone in with the idea of skiing “the elevator” but seeing a few tracks in it, led me to a line that looked just as steep instead that was untracked. It didn’t go that well for me and I started a reasonable amount of slough and took me down for a few seconds. I was able to ski out of it, but I was shaken up a bit. It made me question my decision making ability and whether or not I should be in the mountains in precarious situations or home with my little guys. The answer is probably both, but I need to be happy with the decisions I make and also try to learn from them. I read this quote today, which made me feel a bit better:

“It is not the critic who counts; not the man who points out how the strong man stumbles, or where the doer of deeds could have done them better. The credit belongs to the man who is actually in the arena, whose face is marred by dust and sweat and blood; who strives valiantly; who errs, who comes short again and again, because there is no effort without error and shortcoming; but who does actually strive to do the deeds; who knows great enthusiasms, the great devotions; who spends himself in a worthy cause; who at the best knows in the end the triumph of high achievement, and who at the worst, if he fails, at least fails while daring greatly, so that his place shall never be with those cold and timid souls who neither know victory nor defeat.” – Teddy Roosevelt

When the mountain kicks your ass, it’s best to laugh it off. Exiting “the Cross” (Photo by First Tracks Productions)

I’ve had some victories and I need to remember those. I skied Halls of the Gods for the first time a line that’s been on my list forever and the conditions were pretty great. I skied Mt. Tom, hiking over 7,000 vertical in under 7 hours and skiing great snow all the way down. I skied the Eagle chute above Emerald Bay in powder. And I finally skied the Bear Scratch. In between some of these tick list lines, I had a lot of fun days skiing powder at the resorts and a lot of great backcountry runs with friends. There is still many days left in the season and if I keep putting this type of pressure on myself, I’m going to get burned out. I’m already starting to feel it. I love skiing and I can’t stop thinking about it. I was the same way with soccer and I’m the same way with triplets. In an ideal world, I’d be paid to ski until 2pm every day and then hang out with the triplets the rest of the day, but I’m not sure what kind of person that would make me. Would I then be immune to the struggles of all people, certainly. Let’s be honest, I have it pretty good!

I got an AT set up this year which I’ve skied a handful of times, here I am skiing out of Halls of the Gods for the first time ever. Good to add a line to the tick list.

The summit of Mount Tom – skied from 12,800 down the Elderberry headwall to car at 5,600. Good to know I still had it in me. I missed my boys being gone just 2 days though.

Luckily the skiing has been good close to home. Here my buddy Domi drops into one of the Emerald Bay chutes

After my little scare yesterday and my continued perception that I’m under performing in the mountains, I’m excited to spend a few weeks focusing on skiing with the triplets, skiing at the resort while it’s open, not comparing myself to some of the slayers on Instagram, and maybe getting out of the Tahoe bubble for a bit. I can always get back to objective skiing in late April or May – or in years to come. In saying this, I cringed a bit, knowing this is a once in 25 year season, but I need to accept that I am enough, I’ve done enough, and my decisions may not always be right, but they are better than making no decision at all.

Skiing with Declan a few weeks ago! The boys have been skiing about 5 times each and last time was the best time yet!

Taking advantage of a warm week in March to hit the beach with my 4 favorite guys.

I’ve tried to ski the Incredible Hulk 3 times this season. The first time, it was -17 degrees F, and we simply went up the wrong drainage and ended up on the other side of it, but didn’t know it. The 2nd time, the couloir was firm, bordering on icy, and the people who had skied it the day before us did not help the conditions by sideslipping the whole thing. I was relieved when my touring partner and former King of the Hill champion Will B wanted to turn around too. Sometime early last week, I decided I was due for an ass kicking and so I rallied my friend Greg to head back to the Hulk. We started hiking around 9:30 AM Saturday on the dry trail out towards Barney Lake from Twin Lakes. 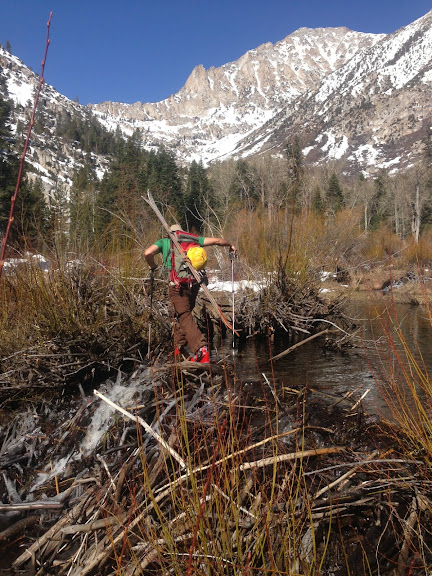 The hike in was sporty at times. Here is Greg crossing the beaver dams. 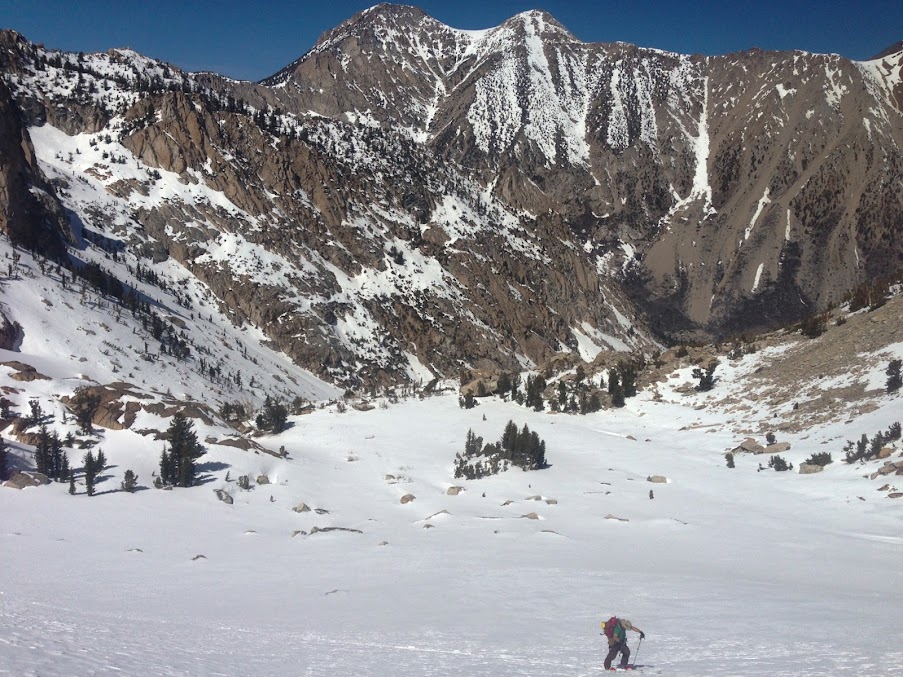 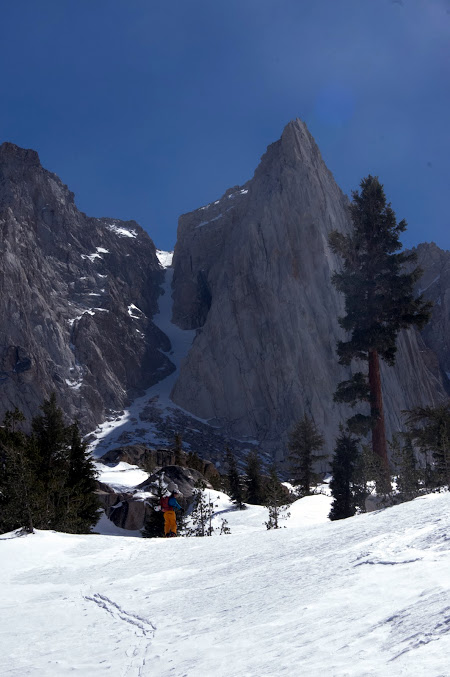 The Incredible Hulk comes into view. Still no sign of it turning green. (Photo by Greg Marsden) 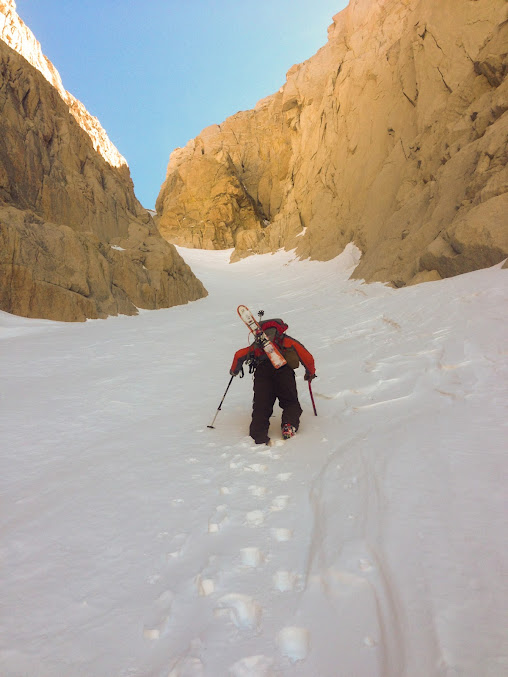 Greg making the stairway to heaven or something like that. 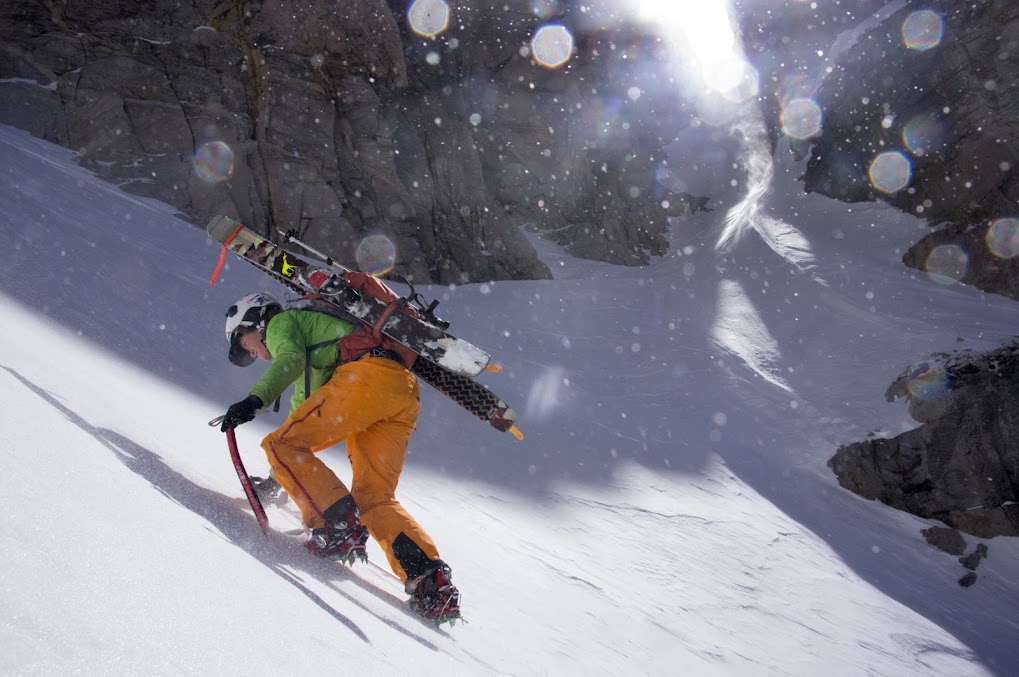 Grunting my way up the couloir… incredible photo by Greg Marsden! NO FILTER! 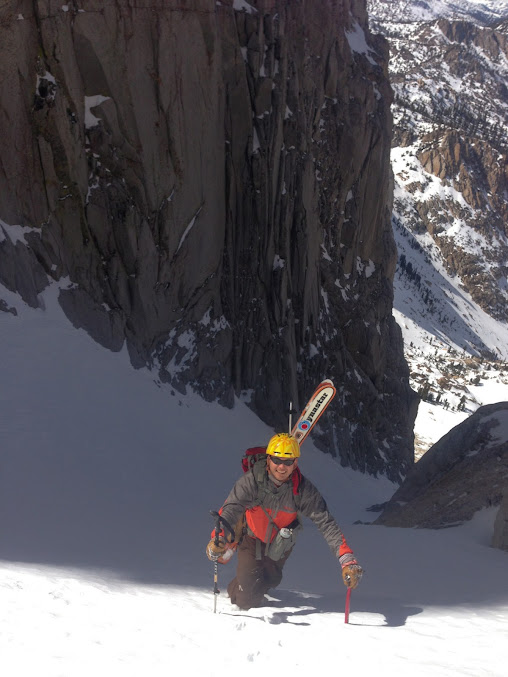 Smiling because he’s within steps of the top! 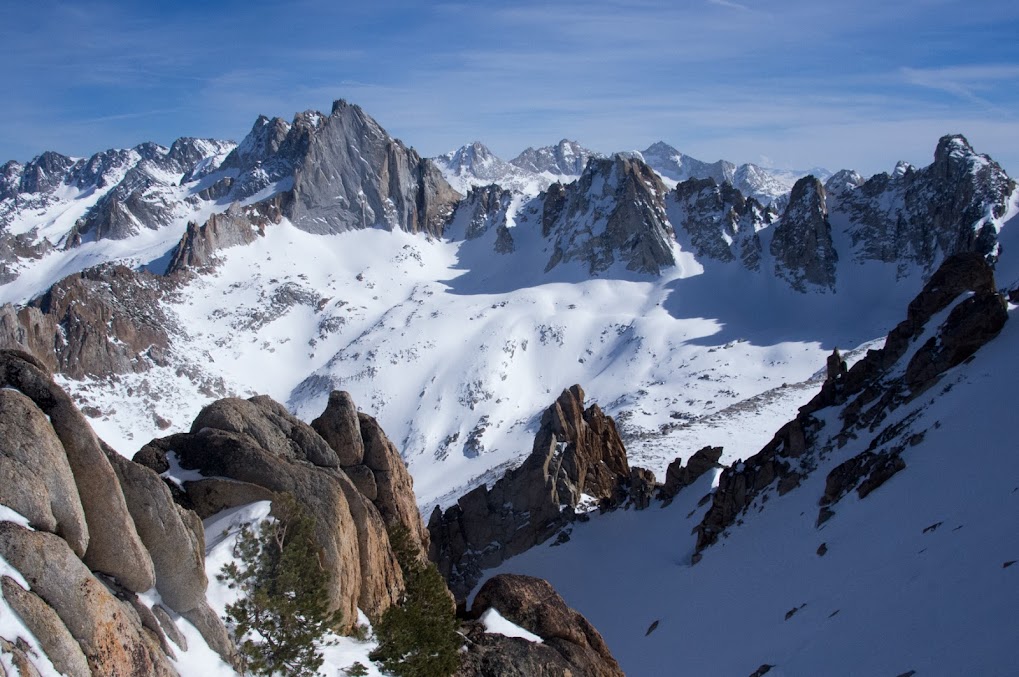 The view from the top was stunning and inspiring 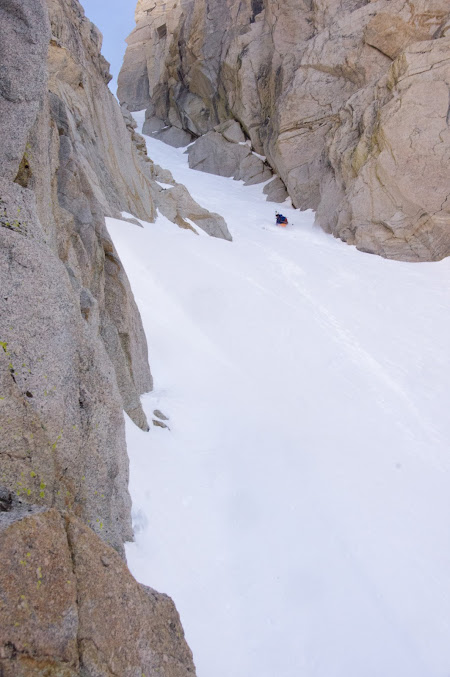 The author getting into the wider portion of the chute. Photo by Greg Marsden 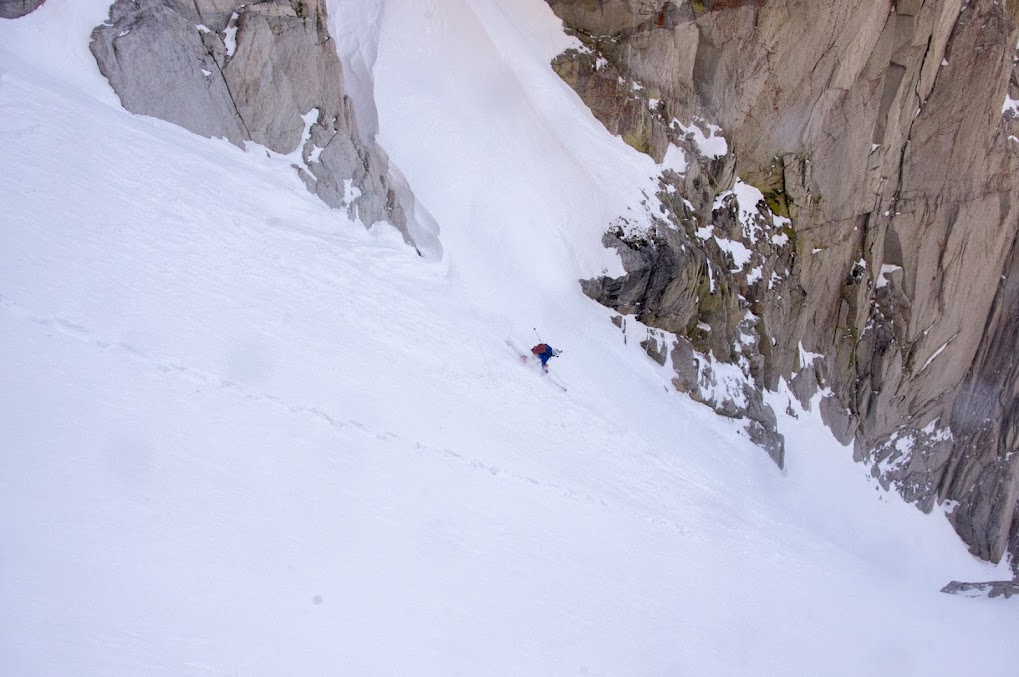 Opening it up more after the crux. Photo by Greg Marsden 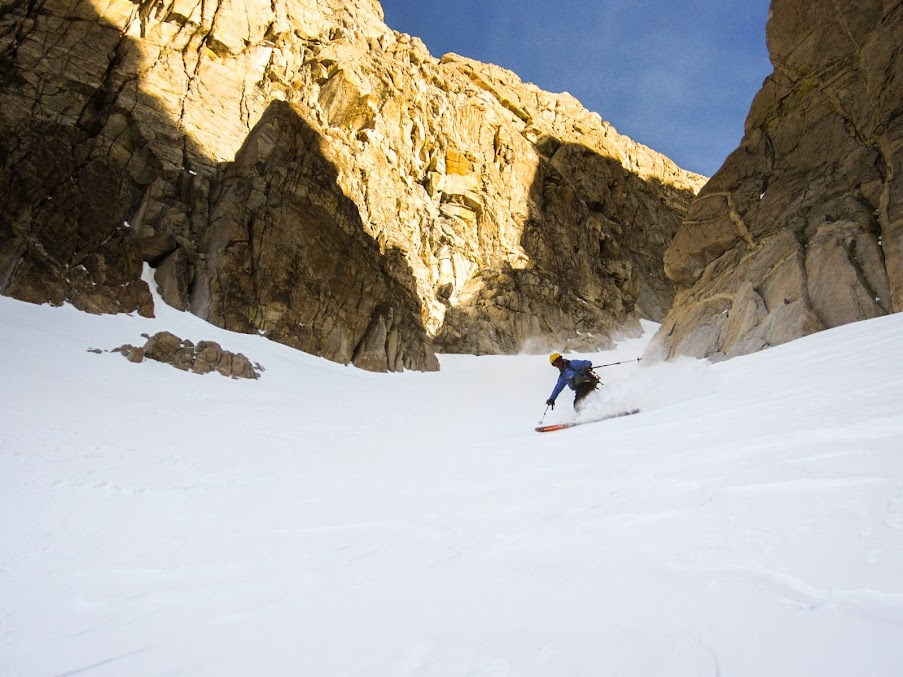 The only reasonable pic I snapped of Greg! Poor photography skills today!

We got to open it up a bit after the couloir and ski out an additional 1,000 vertical feet or so and then it was back to walking. 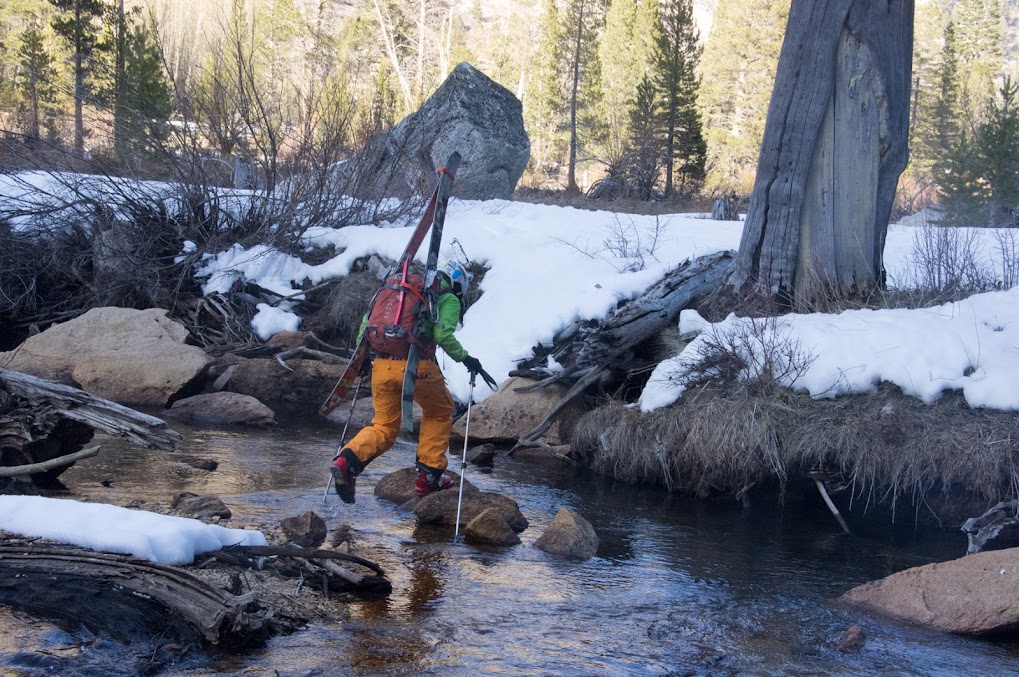 A hop, skip, and a jump and back to the 2 mile trail out

By the time we reached the car, we were exhausted and ready to get out of our ski boots! The best part of skiing in the Eastern Sierras are the nearby hotsprings so we headed to Travertine Pools to soak and take in the sunset! 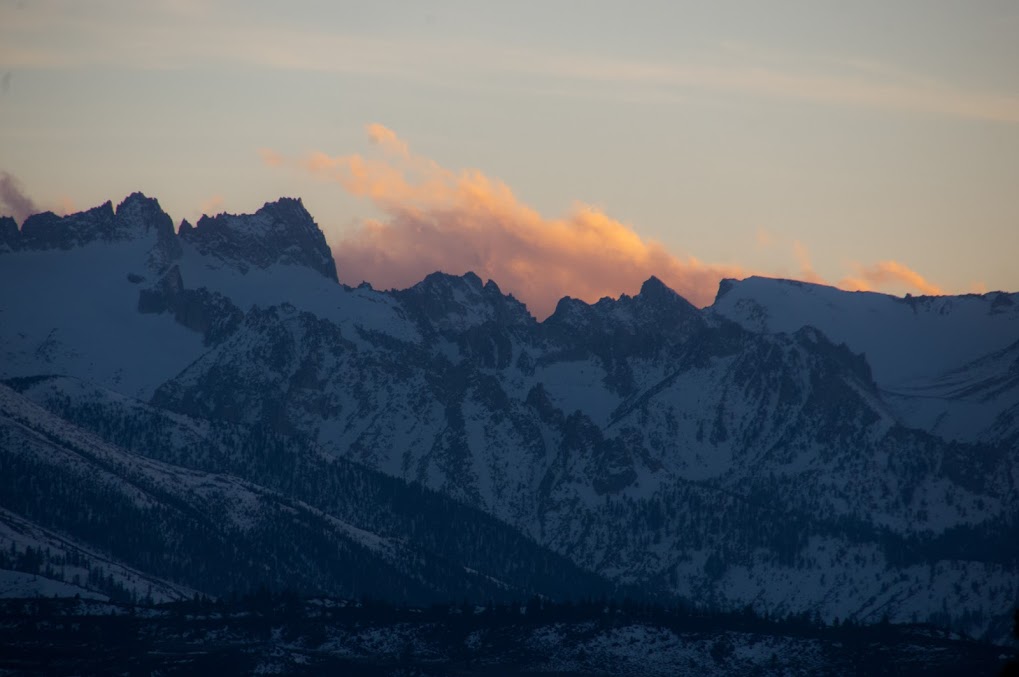 Sunset over the Sawtooths. What a place! Photo by Greg

Thanks to Greg for being such a great touring partner and capturing the moment with his photography skills! Hopefully the snow sticks around long enough for us to check off more lines this spring!