Diani Beach was recommended to us by some residents of Wildlife Works, so Dan and I hired Mama Mercy’s nephew Dennis to drive us down there the next morning. It was Friday and Dan had to depart for a safari on Sunday, so we wanted to make the most of his time there. The road trip was hilarious in that Dennis had a collection of songs on his MP3 player ranging from hip hop to country with the last set being all Pink songs. Awesome. We passed sisal plantations (the plant used to make roofs) and entered the Mombasa city limits. Americans were to be on alert in Mombasa since the Muslim population is high and it is somewhat close to Somalia. We cruised through the city center and had to catch a ferry across an inlet and then drive another hour south to Diani Beach.

Sisal plantations on the way to the coast – “green” roofing!

By the time we got there and settled into our lodging, we were ready to jump into the ocean. I can count on one had the times I’ve been to a warm coastal ocean – twice, so I was eager to test the Indian Ocean out. As we headed towards the water, we were approached by “Captain Banana” trying to sell us wooden carvings and a boat trip. We explained that we were going for a swim and headed out into the ocean. The waves were minimal since a reef protected the shore about ¼ mile out and the temperature was perfect so we attempted to swim to the reef and stayed out for about an hour. The salt concentration seemed higher too since it was really easy to float. When we returned to the beach, we were sure Captain Banana would be gone, but he was right there asking us to buy stuff again. Dan caved and bought something, but that just seemed to egg on other beach vendors who practically followed us to our hotel and then yelled at us from the beach. We were the new tourists in town and therefore the newest targets. 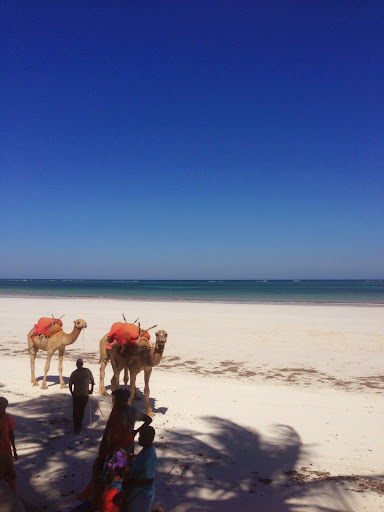 People selling stuff, including camel rides, on the beach.

Despite the infamous Diani “beach boys,” the beach itself was beautiful. White sand, turquoise water, perfectly compacted sand for running or football, and the hotels were set back quite a way. But there were quite a few hotels and we couldn’t help but walk through some of the more ridiculous looking ones. We entered the Baobob, a known Italian resort, and saw a beautiful infinity pool overlooking the ocean, as well as a poolside step aerobics class, and cheesy euro discotheque music playing somewhat loudly. Just an overall hilarious sight that is hard to describe and I unfortunately did not have my camera.
The next morning we took out SUPs and headed out to the reef to see if we could catch some waves. I surprised myself by catching and surfing the first wave I went for and it was awesome! Dan and I proceeded to catch and surf a bunch of waves and then headed in after about 2 hours. I’ve never had a surf break completely to myself and so it was quite fun for a beginner such as myself.
When we returned, Dan had to leave and I decided to take a kitesurfing lesson – a sport I’ve always admired. The first lesson is a trainer kite, but we moved through that quickly and were able to start with the big kite for the last hour. The wind was a bit sporadic and so we decided to finish the lesson if the wind picked up, which it didn’t for the next few days. So, I still have a lot to learn before I’m kiting on my own, but it was a nice start and a perfect learning beach. 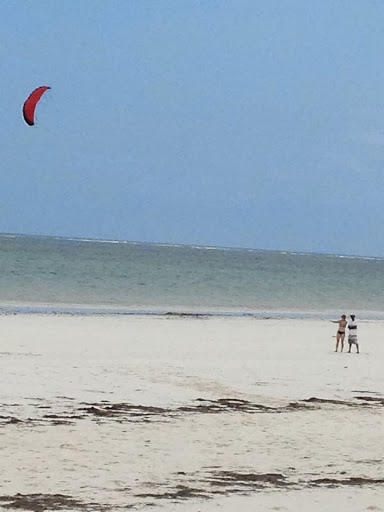 Getting kite surfing instructions (and marriage proposals from my instructor – so weird).

I moved over to the South Coast Backpackers Hostel since Dan was gone. On TripAdvisor, it had quite the party reputation, but it was the least expensive option and close enough to the kiting center, so I gave it a go. Arriving, I selected a bunk and sat down with a friendly looking foursome who seemed to be around my age. I met Laura and Moses, Kenya locals and Masai Mara safari guides and their British friend Debs who was visiting. And also Simon, an eccentric but funny German firefighter, graffiti artist, skater, and retired hip hop DJ. Conversation was easy and an American named Nico joined our group. After dining and drinking together, Nico, Debs, Simon, and I hatched a plan to head out to the Kisite-Mpunguti Marine Reserve the next day to look for dolphins, sea turtles, and maybe even whale sharks.
The next morning we had a $1 breakfast of eggs and Kenyan donuts and met up with our boat, a modified Dhow, which is an ancient Swahili sail boat, though unfortunately we never used the sail. As we motored out we spotted a pod of dolphins and were able to follow them most of the way to the marine reserve. We jumped off the boat when we reached the reef to snorkel and saw colorful and large fish, lobster, and an octopus. Unfortunately, we didn’t see any sea turtles or whale sharks, but it was still a lovely time in the ocean. We headed to Wasini Island for lunch, which is a coral island where almost everything has to be imported. Seafood and sea grass were on the menu before we took a quick tour of the island and them headed back to Shimoni. Unfortunately, on the way back to the hostel, Simon had to be dropped at the hospital because he wasn’t feeling well. Rumor is that he recovered a few days later, but unfortunately, I did not get his contact information. 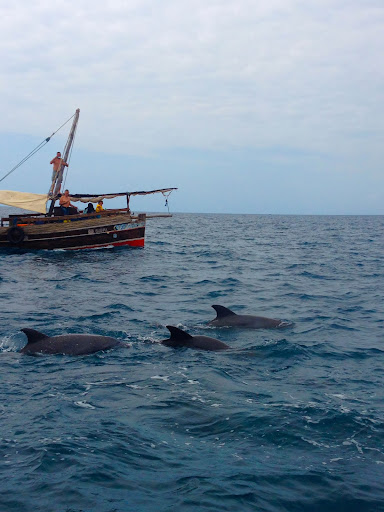 Dolphin spotting from a dhow 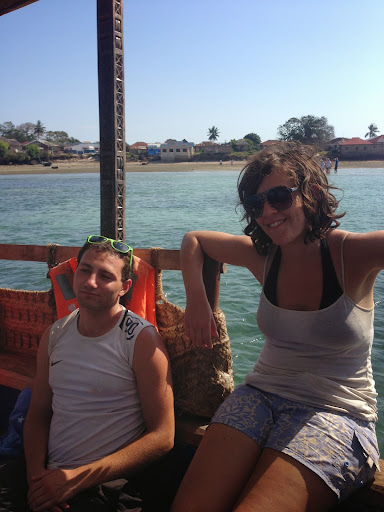 Nico and Debs on the way to Wasini Island 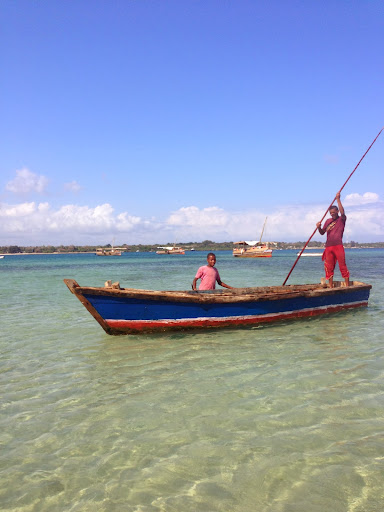 Our transportation to the coral island for lunch

That night, Nico and I met Lina and Lena – Swedish and German girls respectably who were living in Kenya for about 6 months and volunteering at an orphanage on the North Coast in Kilifi. They invited us to join them for a few days and we eagerly accepted the opportunity to help out and see a new place. Debs, Moses, and Laura headed out on safari the next morning and we had one last swim in the sea and hostel’s pool before catching a matatu with Lina and Lena towards Mombasa. While Diani Beach was beautiful, the incessant haggling from the “beach boys” was starting to wear on us and we were eager to head to a less touristy locale.