We got a new puppy! She’s amazing! Here name is Scout and she’s some sort of Australian Shepherd mix we rescued from a shelter called Dog Town Canine Rescue. If you’re looking for a new pup, you should consider visiting these folks out in Fallon, NV. They have so many dogs and are a no kill shelter. Scout was from a litter that was dumped in a nearby Indian Reservation. She’s sweet, smart, athletic – she loves chasing balls and fetching and already knows how to sit at 8.5 weeks! 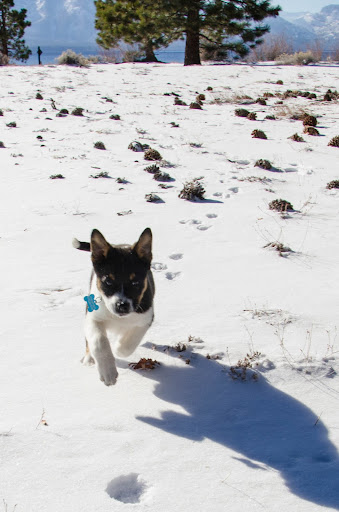 Scout makes a run for a ball 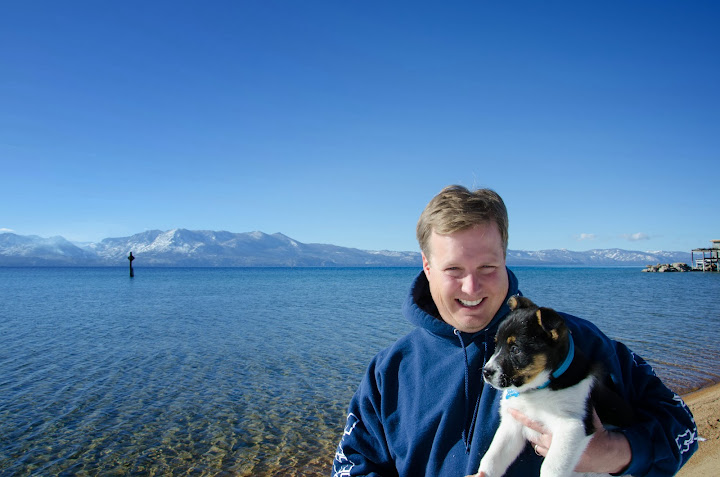 PK and Scouty at the lake

As you may have figured, Yzie passed away while I was in Kenya. It was incredibly sad, but, overall, I think he had a great life. I’m pretty sure he sent us Scout, so thanks Yzerman.

I like to imagine Yzie hanging with friends in beautiful places. RIP buddy. I’ll never forget you.

Sending it to Prep for Winter

One of the most fun ways to prepare for ski season is to work on air awareness by visiting the Carson Valley Swim Center. Plus if you go on Friday nights, it’s only $1!!! Here’s a fun video from last Friday.

I’ve finally gotten around to compiling the results. I’m not sure they are perfect but everyone who participates knows that this event is about (1) having fun (2) pushing yourself and (3) bragging rights among friends. I think the most fun thing is the slight competitive spirit everyone has when there are no prizes and not much training. At the finish line I heard friends ribbing each other – “you were beating me, but then I passed you on the run,” etc. My husband asked me what my favorite part of the event is and I said that it’s the end, when everyone keeps saying how much fun they had! When I first did this event with just one other friend, I knew more people needed to get in on it, so I am elated that we continue to grow each year!

Congrats to the men’s winner – Lee Collins, the women’s winner for the 3rd year in a row – Lauren Lindley, the Masters winner – Terry Daniels, and the Youth winner – Marin Underhill!

A sample of some of the great photos that came out of the event. 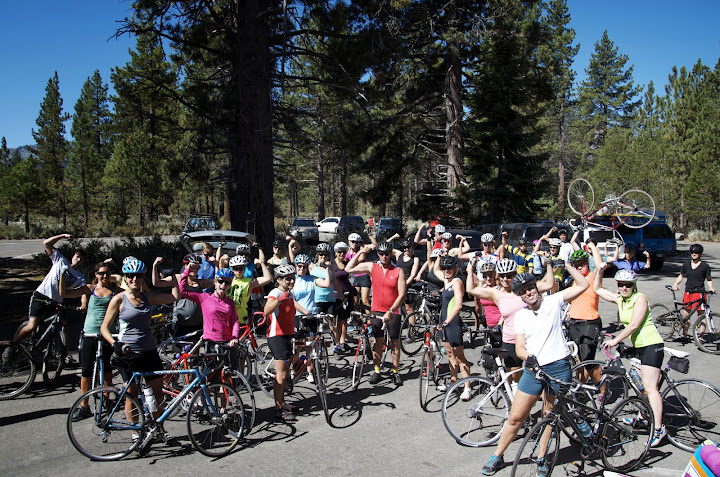 The start (Photo by Gretchen Eichar) 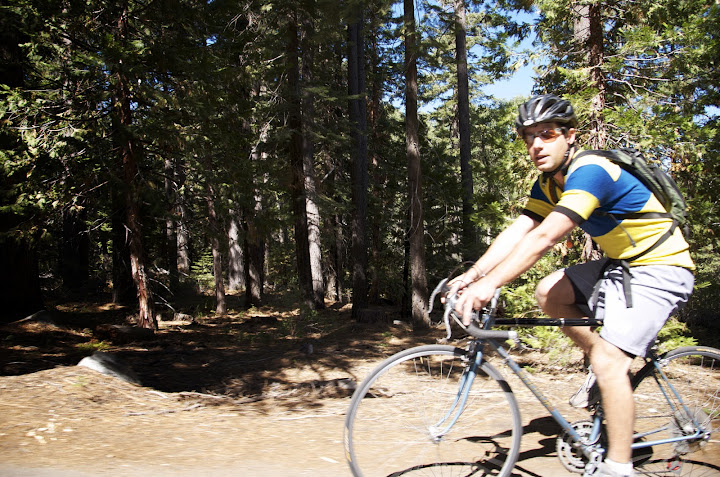 The bike (Photo by Gretchen Eichar) 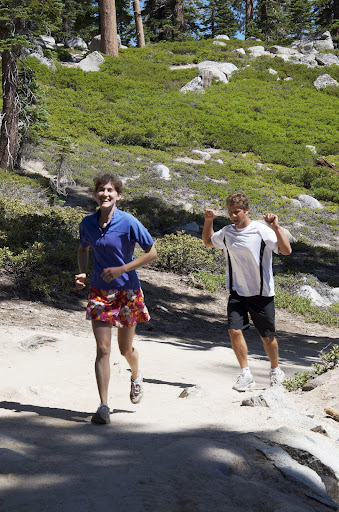 The run (photo by Gretchen) 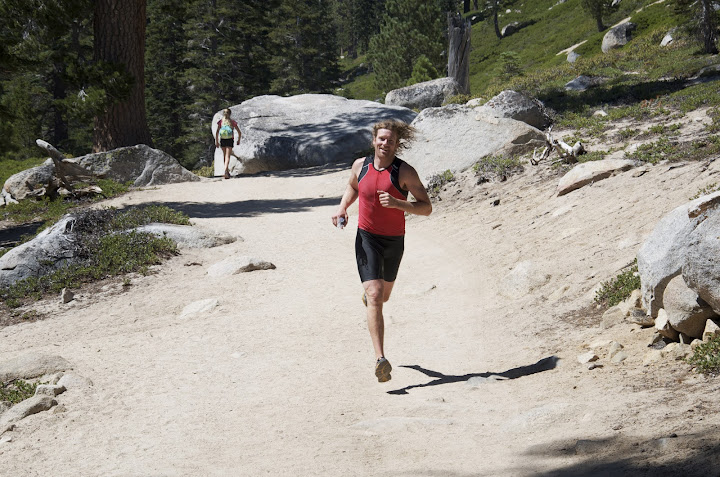 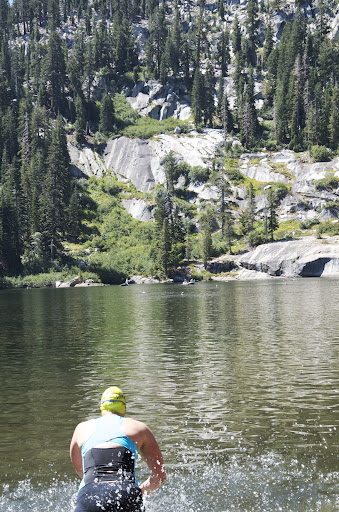 The swim (photo by Gretchen) 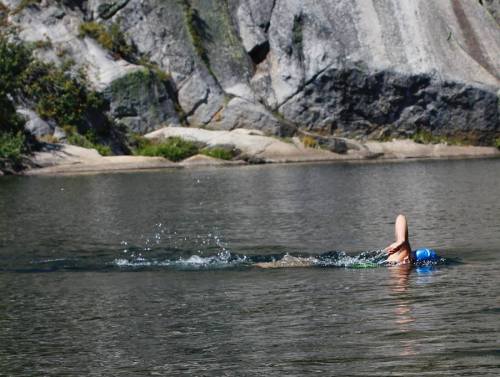 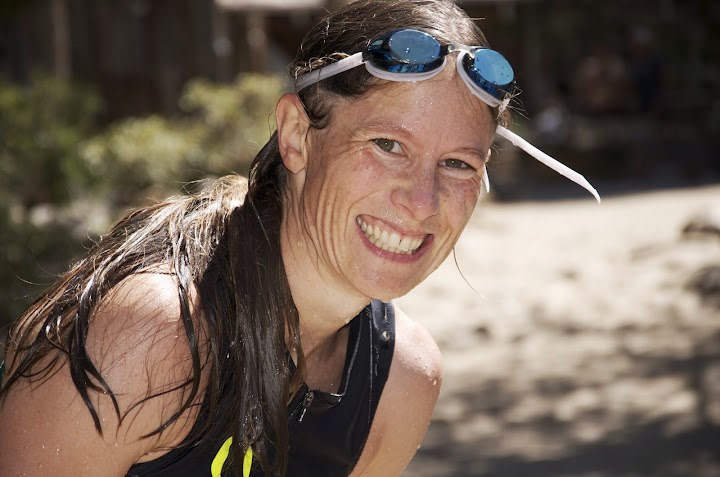 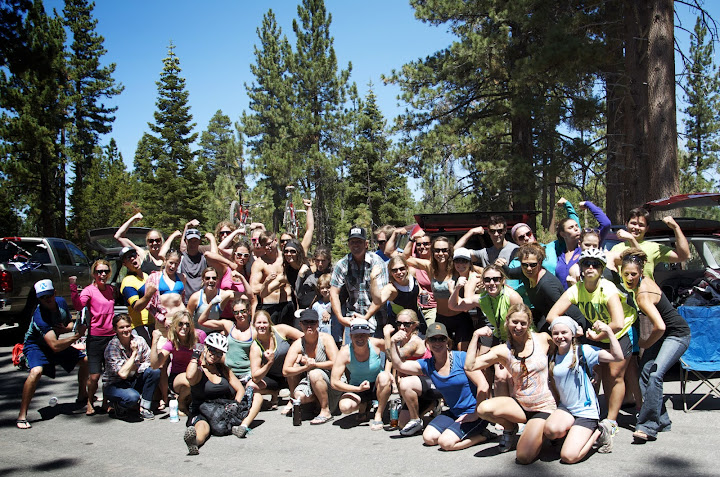 The finish (photo by Officer Underhill)

So without further ado…

To see all the photos from the event, go here.

It’s that time of year again!

Time for the 3rd Annual Angora Lakes Triathlon! See you at Kiva Beach at 10 AM August 3rd! Read a recap from last year here.

Last year’s top 4 talk about what it takes!

Pretty exciting event coming up in Tahoe to raise much needed funds for Oklahoma schools damaged in the recent tornados. The schools were completely destroyed – the footage on the news was heartbreaking. To top it off, one of the participants is from the town where the most damage happened, Moore, Oklahoma.

A cadre of adventurous souls and myself will be dropping off a powered paraglider and getting launched off a giant blob 50’+ into the air. There will also be BASE jumpers hitting the blob! All of this is going down July 14-17th. So come on out, or pledge a 25 cents or 50 cents per jump! I’ll only be jumping for 3 days, July 15-17, maxing out at about 20 jumps per day.

A powered paraglider above Lake Tahoe 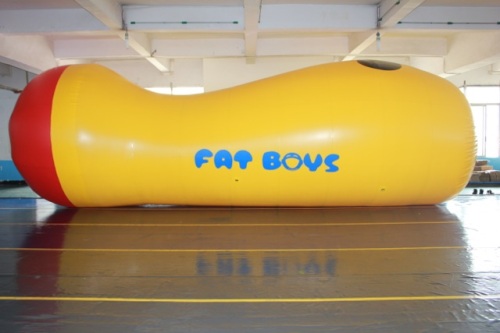 The “blob” we’ll be launching off in Lake Tahoe 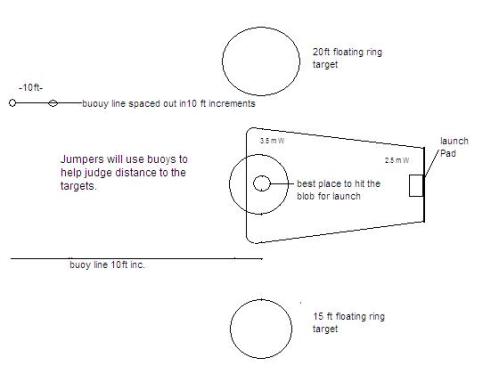 The set up for the launch. BASE Jumpers and jumpers like me being dropped from the air! 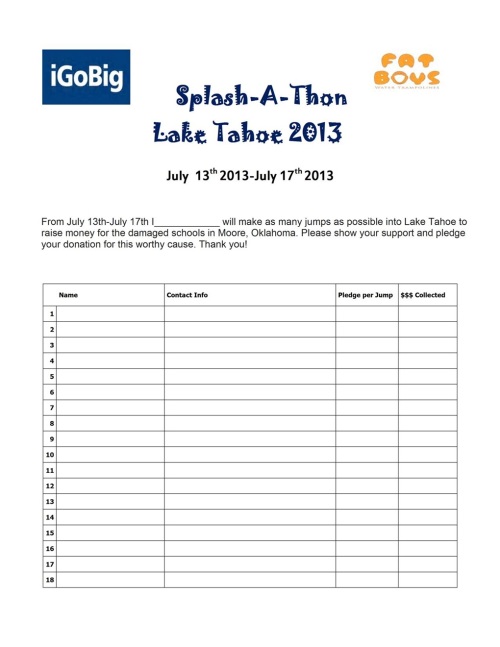 Pledge your donation now! Go HERE to make a donation or email me at meghan@shejumps.org to make a pledge!

The season really fizzled out in the Sierra, but I still had a great winter and progressed as a skier. Total stats to date – 121 days on snow, 70 at a resort and 51 backcountry, plus hoping to get at least one more on Shasta before the official end of the season. I threw a number of back flips and landed most of them to my feet though I would like more style and confidence. I passed my PSIA Level 3 Telemark Exam at the end of April in Mammoth, which I feel was a huge accomplishment. Despite the reputation of PSIA, the process has helped my skiing immensely and I am grateful to have “coaches” like Aaron Pearlman, Urmas Franosch, and Steve McDonald. Oh yeah… and I went skiing in Alaska!!! If what economist Malcolm Gladwell says is true and it takes 10,000 hours to truly become great at something, I’m not even halfway to becoming a great telemark skier. However, I can’t wait to see what the next 5,000+ hours bring (hopefully more snow and less carbon!).

Here are a few photos from my recent ski adventures in the Eastern Sierra.

The drop in to Solstice Couloir off Mt. Dana

Nicole had to drop in on one ski after accidentally dropping one down the couloir. Backcountry lessons.

My sister pointing at Solstice 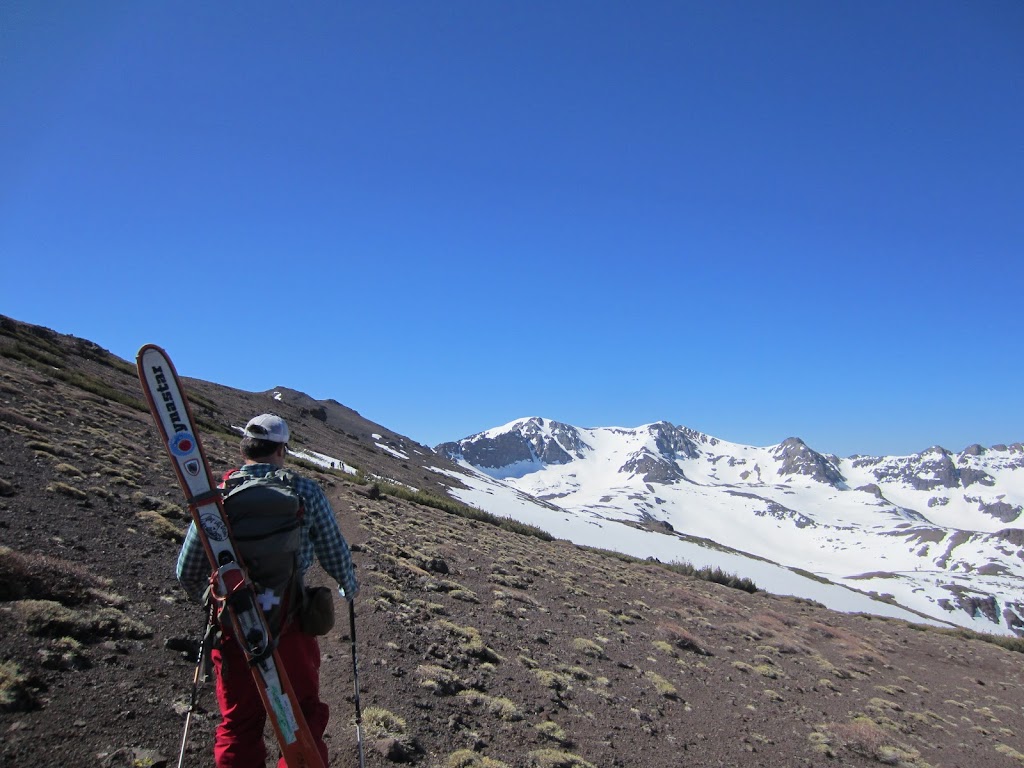 Greg on his way out to Leavitt Peak 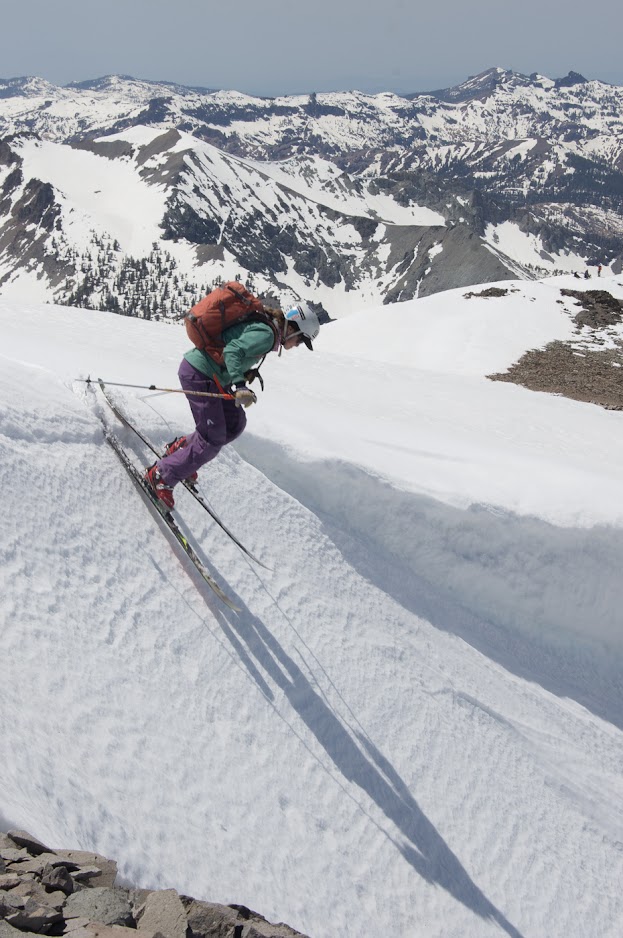 dropping into the Leavitt Y Couloir (Photo by Greg Marsden).

But the pull of summer in Lake Tahoe is strong…

Julie tearing up Tahoe in front of Mt. Tallac on May 12th!

Rachael Burks asked me to help her with the Pain McShlonkey while we were in Alaska and I was all in! If you haven’t heard of Shane McConkey, you don’t live in our world, the big mountain ski world. He was the most influential big mountain skier ever. Also, he was hilarous and never forgot that skiing was supposed to be fun. The Pain McShlonkey, or PMS, is held annually at Squaw Valley around the time of his death 4 years ago. It features a Chinese Downhill and an Extreme Small Mountain Competition – all competititers are on snow blades, snowlerblades, fruit boots, whatever you call them. It is an ode to Shane’s iconic character, Saucer Boy.

I decided to take it to another fruity level and mount my snow blades with telemark bindings. I was warned I should practice before the big event – actually, at least 2 people said to me “you’re going to die.” It wasn’t as hard as I thought, and I hope to get an entry of my own next year. Here is a video of my practice session.

The day of the event, we were nervous since our run required a lot of coordination. I mean, Rachael had a title to defend. We chose to reenact the Shane scene from Matchstick Productions’ Seven Sunny Days, which was a play on James Bond.

We had a chase, a rumble, and fireworks, but the audience didn’t quite get it, so we ended up in second to a deserving Lindsey Vonn, who came back from a knee injury to compete, complete with Tiger Woods in tow. It was a super fun event and I hope to be a full on competitor next year, and I also hope we made Shane proud.
Here is the video my friend Greg captured with his iPhone as well as some photos from the day of fun and here is a write up on the event from Powder Magazine.

The camel coming through the finish at the Chinese Downhill

The chase during the extreme small mountain comp with fireworks exploding

Rach and I after our run. Gangster, per usual. 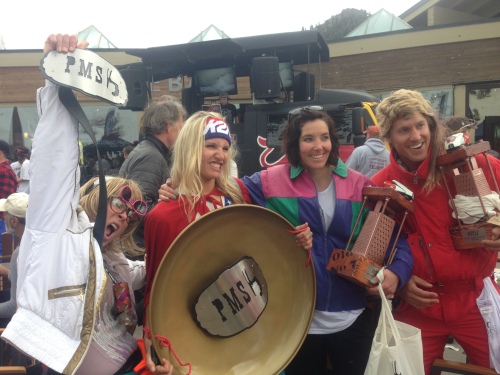 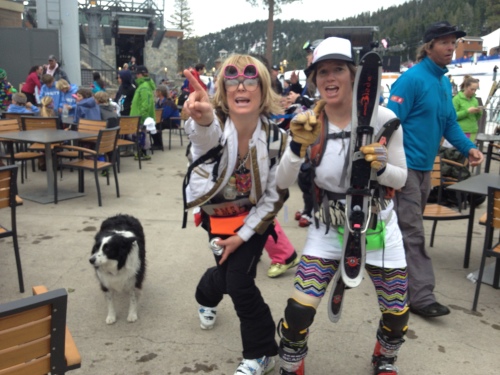