Kenya 16 Years Later: Getting There

The days leading up to my month long trip to Kenya were fun and productive. I savored the time with my husband and dog. I rode my mountain bike as much as possible on the tacky Tahoe singletrack amidst the golden fall colors. I visited the lake and marveled at its clarity. And of course, I worked, trying to get a head start on my time away and not leave my coworkers with too much to clean up. I didn’t get to visit with too many of my close friends in Tahoe before I left and I know at least 2 who will have a brand new baby when I return.

Patrick drove me to the airport on Thursday morning. My flight was to depart at 7:15. Weighed down by 100 lbs of luggage, PK snapped a quick picture before I made my way to the Southwest counter. 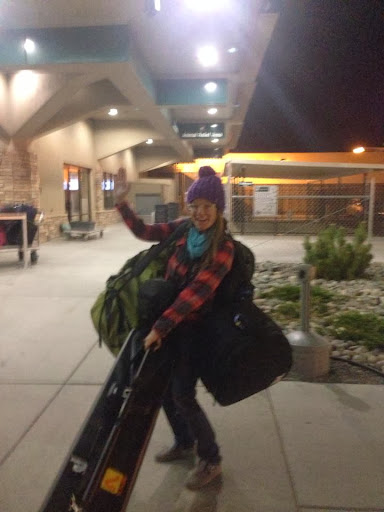 skis to Africa, why not!

Due to a low personal budget, I book the only free flight I could get to Dulles, where my flight to Nairobi would depart from. The US government has just opened back up and I’m not sure anyone was even paying attention at this point. Checking the bags and finding them both to be under 50 lbs was a relief and I made my way to the gate. I sat next to two older women off to a cruise to the Panama Canal. I regaled them with the story of my impending trip. I used to love the attention, but now I just try to deliver the message without seeming self righteous.

When we reached Vegas, I had a new seat companion. The woman was just 2 months older than my mom and had the same skin tone, plus she was a talker. I listened to all her stories as we flew over the Grand Canyon, Lake Powell, and the Rocky Mountains on the way to Chicago. Fond memories of scenic and thrilling western trips flooded my head. I had launched more than a year ago for a 17 day trip on the Colorado River through the Grand Canyon – my friend Debbie was down there right now. I hoped she was having the time of her life. I thought about the history that created “Lake” Powell and the impending ski season, remote backcountry pursuits, powder days, smiles, high fives, and then as we reached the Midwest, I thought of all the cross-country trips through the flats to get to our playground in the west. But as we approached Chicago, everything was obscured by clouds and I could almost feel a denser fall air through the plane window. The airplane busted through the clouds and the green lawns and deciduous trees of suburban Chicago came into view. And eventually the city itself and beautiful Lake Michigan – the very lake that started my love affair with lakes so many years ago. And I thought, “family is the thing that is important to me” and I started questioning the entire trip. That one Midwestern city could invoke this feeling, perplexed me, but I vowed to visit home more.

I was hoping my friend Lauren might have been able to visit me during my long layover at Midway, but the time was a bit too tight for her getting out of work, so I took care of some emails, ate at Potbelly (because I’m from the Midwest and I love these mid-level chains), and caught up with my mom on the phone. The next flight was to Dulles, the final leg of my trans-America flight. I caught an incredible glimpse of the Chicago skyline with Lake Michigan in the foreground and bid adieu as the clouds engulfed the view again. I spent much of this flight reading “ Where Men Win Glory” by John Krakauer when not distracted by the incredibly entrancing full moon out the airplane window. The moon was so bright that it was reflecting on the wing of the airplane. 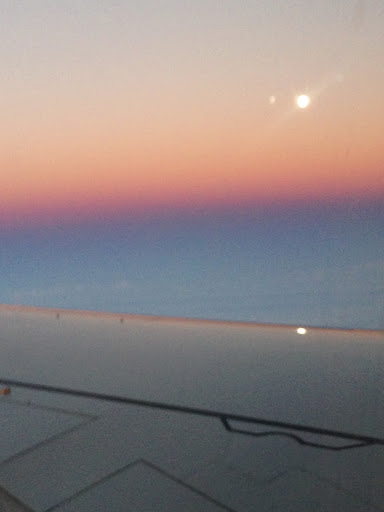 When I arrived in DC, it felt both international and cosmopolitan compared to Reno and Chicago. I picked up my bags and stoically struggled up to the Qatar Airways counter where explained to the perplexed employee why I was bringing skis to Kenya. Proceeding to the TSA checkpoint, I saw an incredibly beautiful TSA agent who looked like she should have been in a Benetton catalog and not checking my ID, but I tried not to stare. She had incredible style though.

The line for this checkpoint moved at the pace of an iPhone with one bar (or the internet in Kenya, but I didn’t know this yet), but the patrons were diverse. I tried to look at everyone’s passports to see where they were from and then I started crafting stories for them. I realized could be completely wrong, but tt passed the time so much that I had to chug all of my water when I reached the front of the line. Making it through, I reluctantly passed a Chipotle, one of my favorite mid-level chains, since I knew Qatar would be feeding us on board. I had heard them boast of their 5 star food and I was intrigued when offered literally 20 different dietary restrictions/preferences when selecting my meal on-line. I called Lauren and we chatted about our last trip to Kenya 16 years ago after just graduating from high school. It was a good memory exercise. She listened to my concerns about this upcoming trip, leaving Yzie while in poor health, leaving Pat alone with Yzie, not visiting my mom enough, scraping by financially since I was somewhat misled about the cost of the trip, among others. When I hung up, I was excited and intrigued by the journey ahead and I was grateful for the phone call with one of my oldest friends before boarding the plane. Right before boarding, PK called me and they had just beat their cross-town rival and much bigger school South Tahoe! He was incredibly happy after having a disappointing week leading up to the game. I wished I could be there, but I knew he was going to be fine.

There was some confusion boarding the plane, but I found my seat and room for my carry-ons and sat down for the long flight to Doha, Qatar. John Krakauer had succeeded in pulling me into Pat Tillman story and I was interested to be flying over the Middle East, especially Iraq. I was also interested to be flying on an airline from a Muslim country, albeit a very liberal and pro-American one. Qatar is right next to Saudi Arabia, the birthplace of Osama Bin Laden. I just wished I had a window seat. The seating in economy was somewhat cramped but food service arrived promptly. I couldn’t remember what I selected from the 20 options – it may have just been vegetarian or lacto-ovo vegetarian, or maybe low fat vegetarian? I wished I had selected Indian vegetarian. That looked delicious. Next time! The fresh fruit was great through. I asked for red wine and the stewardess responded “French or Spanish” and I picked French after some hesitation. She poured me a large class and said she’d bring me some Spanish if I didn’t like that one. The alcohol question was answered, but it still didn’t seem right to over indulge en route to a Muslim country, so I stuck with one glass. Towards the end of the flight, I headed back to use the bathroom and saw them pouring out all their wine. It made me wonder if there was any significance to landing in Qatar and wine disposal. 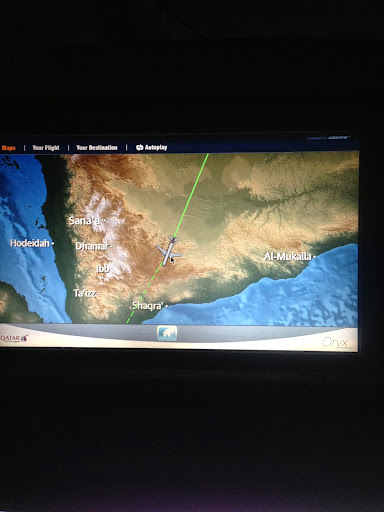 the only view I got flying over the middle east.

After landing, there was some commotion. Clashing cultures of people not waiting their turn and people who believed in order. I observed, but kept my head buried in the book with the situation seemed uncomfortable. I disembarked from the plane in the outfit I’ve had on for 20(?) hours or so and the heat and humidity felt like a mid-summer Baltimore day. The flannel and scarf were certainly overkill. In Doha, the airport terminal is not yet finished, so you have to board a bus from the plan, then go through a “Short Transfer” if you have a quick layover, and then check in again and re-board a different bus to the new plane. The security was quick – no need to remove your computer or liquids, and comedy ensued when I was trying to take an escalator up to my gate. There seemed to be 5 people in front of my apprehensive to step on. Clearly they did not grow up frequenting the indoor malls of the Midwest… though if I had more time in Qatar, I’m sure there were a lot of indoor amenities due to the heat alone! I was told my flight was already boarding, but that actually meant waiting in a room for the bus to come and take us to the plane. The room was full of Kenyan men and one Kenyan woman – at least Kenyan in heritage. I knew when I saw that first electrifying Kenyan smile. The memories of my high school trip started flooding back. These people are happy and they have smiles that make you smile!

So much has happened since 1997 to make the world seem scarier and less accessible – the terrorist attacks on the US embassies in Nairobi and Dar Es Salam, 9-11, and most recently the siege of and mass shooting at the Westgate Mall not far from where I’ll be staying in Nairobi. With all of this, our trust of other cultures and races continues to erode. But we need those smiles and those foreign connections to realize we’re all brothers and sisters. And with that, I boarded a plan to Nairobi, with 23 Kenyans, and 2 other Americans and flew away from the lights of Qatar into the darkness of the Persian Gulf and the African Continent. I just wished it was still light out!