AFS: Days 5-7, The Magic of the Selkirk Lodge

On Day 5, the weather was clear! Anne decided we could have a big skiing day and the group was elated. So we skied down to Kate Lake and started the hike up Justice again, only to find clouds in the same spot. Aborting the mission, we decided to ski near the Albert Icefield, which is down valley and was in the sun. We skied a long run down to Victoria Lake, skinned up, had a dance party in the sun (YES!), skied back down, and began our skin up the Albert Icefield. I took about 75 photos during the hour hike because it was so stunning. The large ice features and crevasses loomed to our left in addition to some beautiful ski lines that we all were eying. The snow on this slope was warming though and once we reached the top, and cooled down a bit with a pants off dance off, we decided to split into two groups. 5 of us plus Michelle headed up to the top of Paradise, a 2,000 vertical north-facing powder run. 4 stayed behind to get some skiing photos through the icefield features. 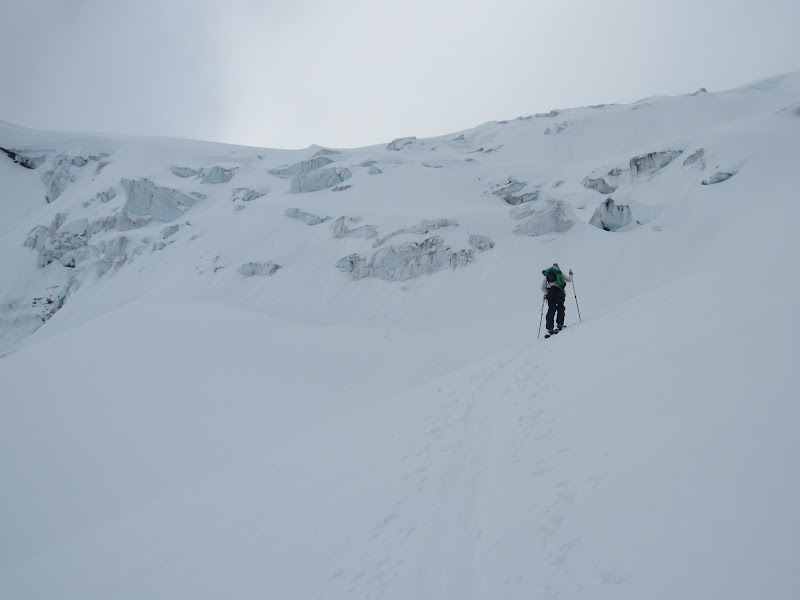 Sandra skinning up near the Albert Icefield 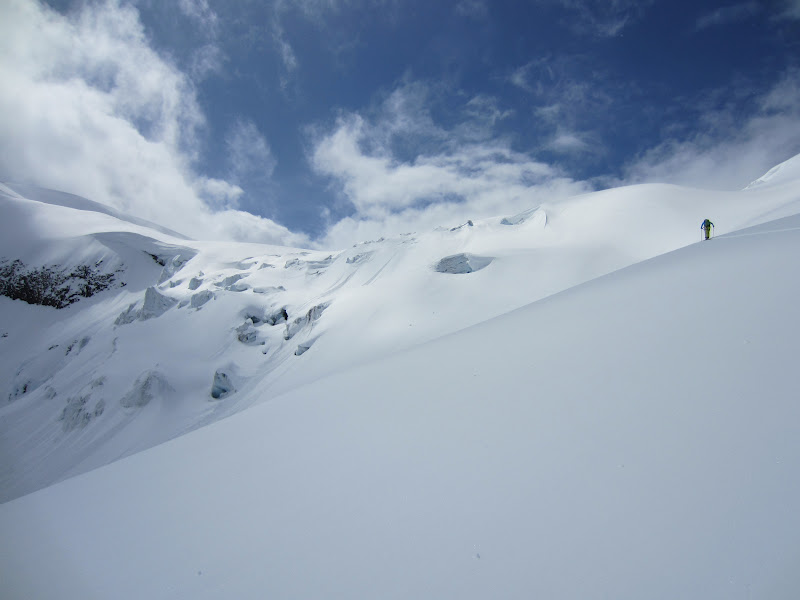 Lynsey above the Albert Icefield 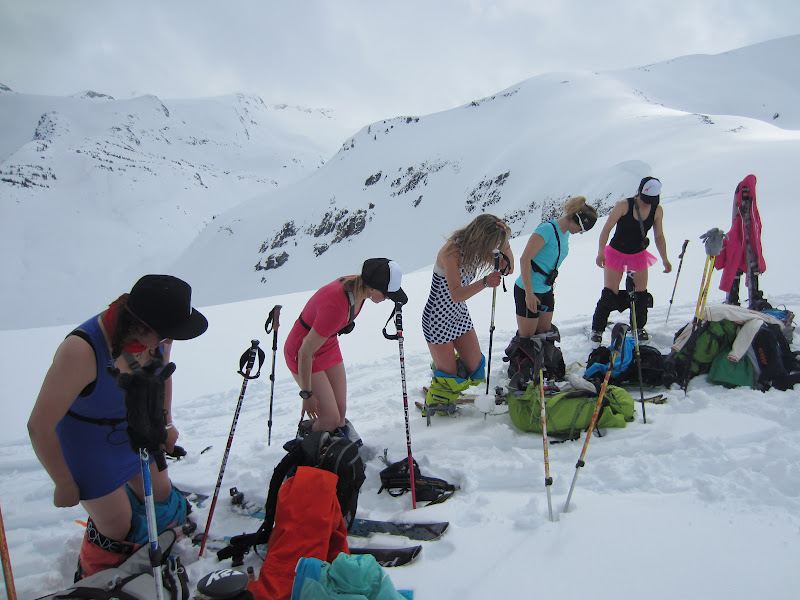 Careful preparation for the pants off dance off. 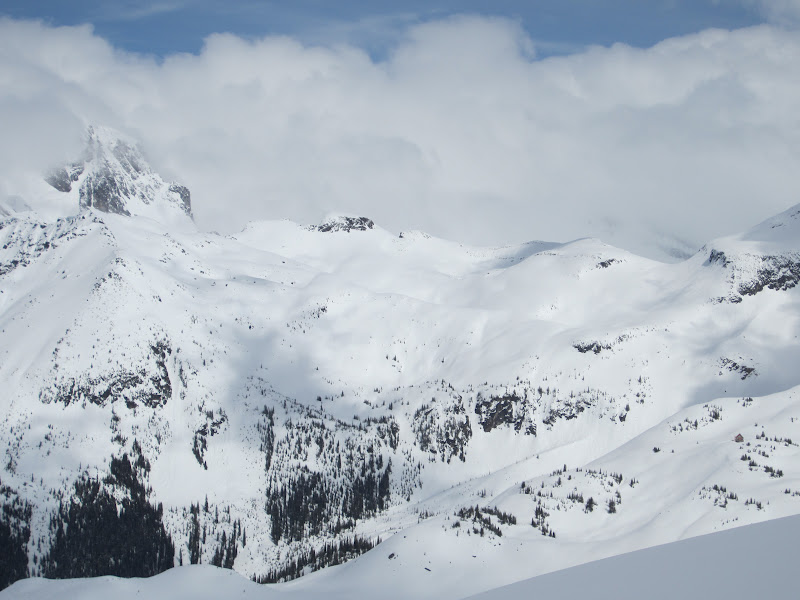 The lodge is down there somewhere – I’ll need to come back to ski that mountain on the left. 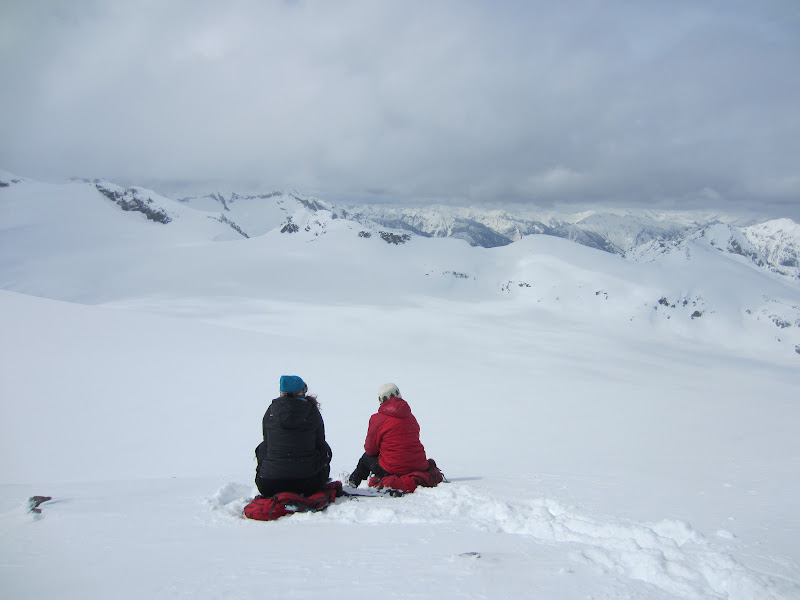 Claire and Michelle taking in the view above “Paradise.”

Paradise lived up to its name and delivered steep powder turns and even some face shots! Lots of high-fiving and general celebration at the bottom. Claire declared it her best run of the season and I honestly couldn’t think of too many better runs. It was super fun and we still had more skiing to do! We skied another 1500 vertical and then had about a 1.5 hour hike back to the lodge. I was pretty tired at this point and was dragging a bit. My iphone didn’t feel like playing music to get me through the skin and so Anne lent me her ipod with a secret backcounty ski mix that included Ozzy and other classics. I ran right up the track with the music blaring, exhausted when I reached the lodge. Then I realized, wow, this was my first day this season where I was tired from backcountry skiing… and it felt awesome! We had finally earned our dinner – and dessert!

On day 6, it was cloudy and snowing. It had actually snowed about 10 cm, but with wind loading, it was three feet deep in some places. After helping dig out and fill buckets for water, we got to work inside setting up both roped and unroped crevasse rescues. We then headed out to practice roped glacier travel and the drop loop system. We were getting more efficient with our anchors and knots that we were using throughout the week. All this stuff takes constant practice, but it was great to feel like we were retaining some of it. After running through the drop loop on our own, we headed over to search for “victims” in a multiple deep burial situation. It took me about 4 minutes to probe strike all three “victims,” but it honestly felt like 10 minutes. Scary! But another great skill to practice, especially in light of the deadly slides this year.

Nat, with her experience, skinned up and helped me whip this kicker into shape by filling in the transition and making the lip less abrupt. We both hit it, but only once and it was exponentially better. I wanted to try a backflip, but the light was popping and we were able to set up and get both group and skiing photos near and below the lodge.

What SheJumps is all about! (photo by Emily)

Ashley getting it done! 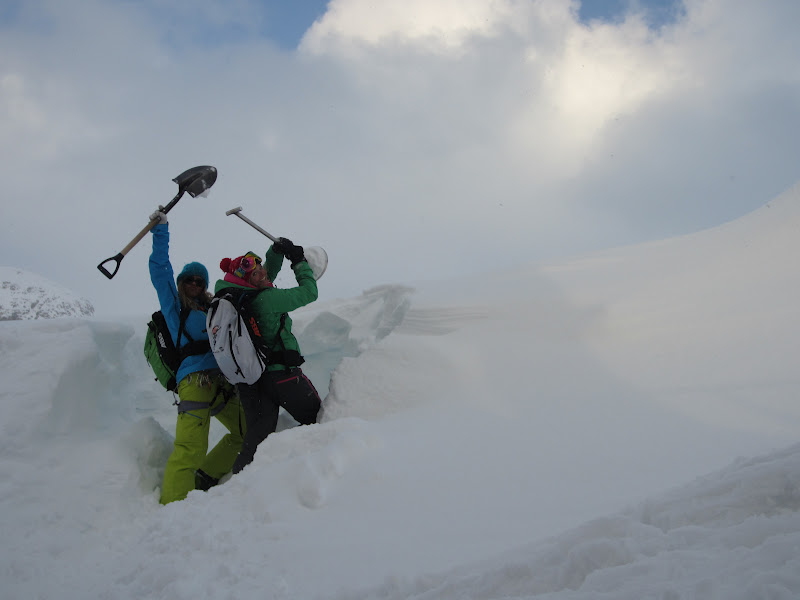 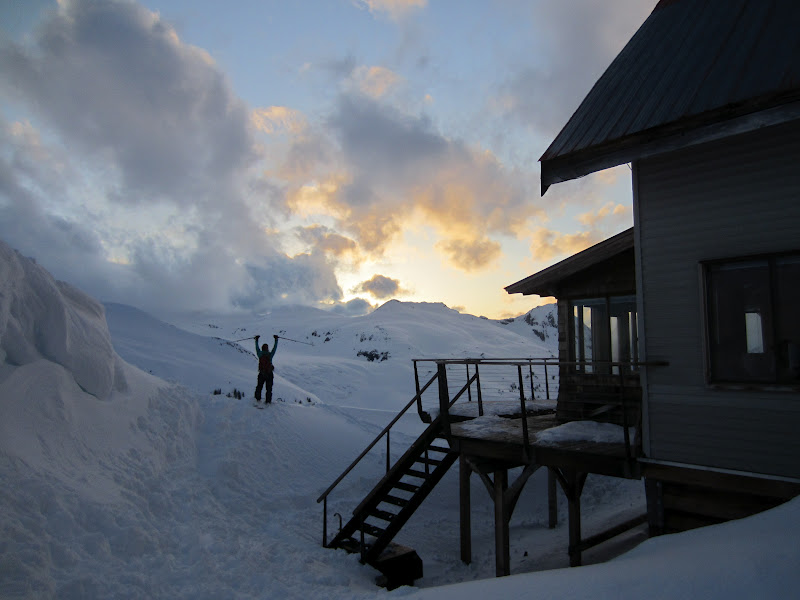 Time for dinner, but not before we claim! 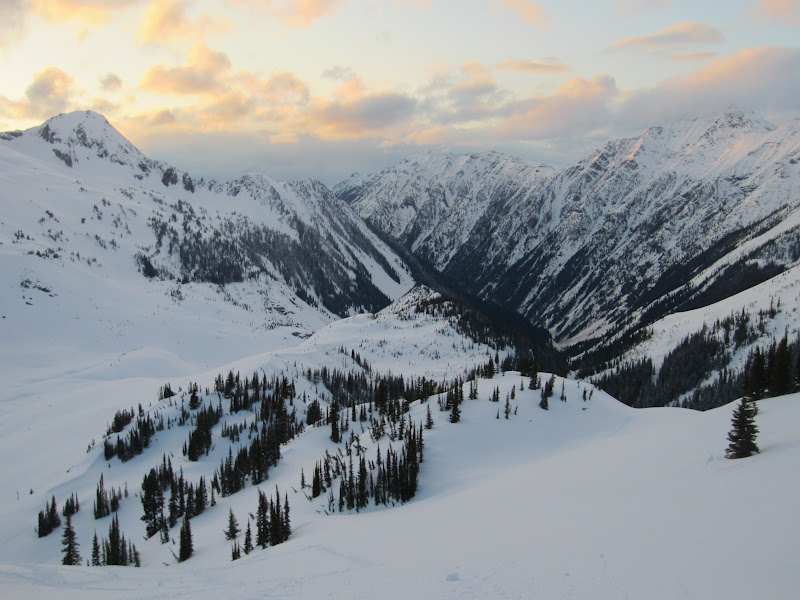 This place is kind of pretty

The forecast for Day 7 was finally for solid sunshine and when we woke up, it proved to be spot on. Meanwhile, I was trying to be extra nice to Grania in Reinet in hopes that they’d invite me to stay one more week. I even wore their favorite outfit that morning (pictured below). The ploy didn’t seem to be working, so we headed out early to ski as much powder as possible that day.

One of the many nights I wore fashionable clothes. (Photo by Hannah)

The hike up was beautiful. We could see farther than we had seen the entire week. We even saw fresh wolverine tracks and tracked them for a bit. 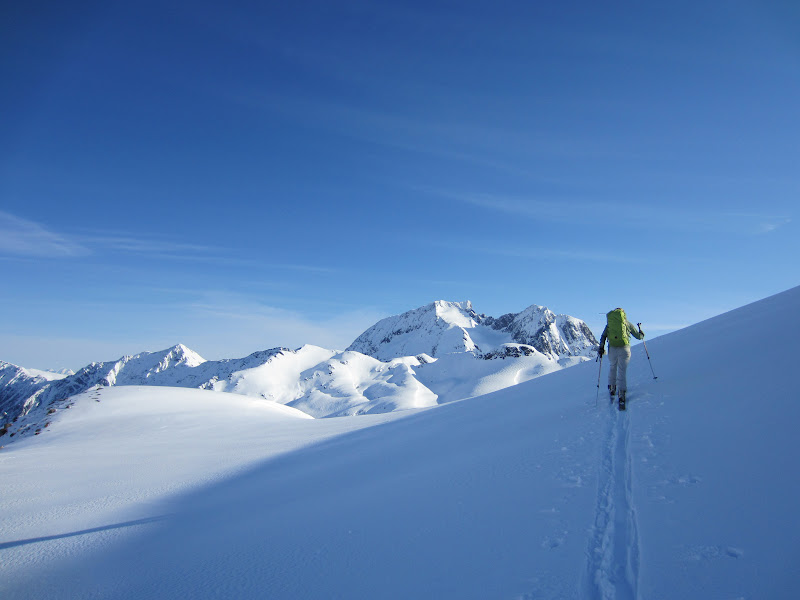 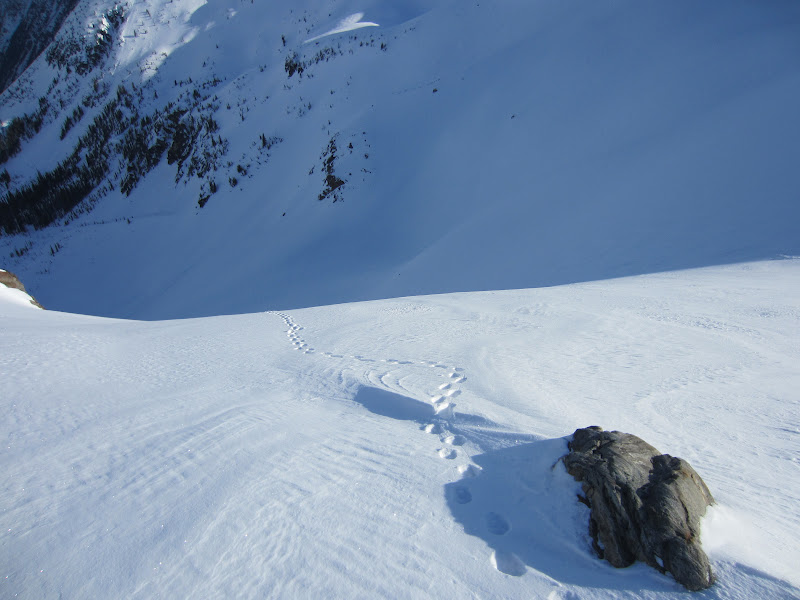 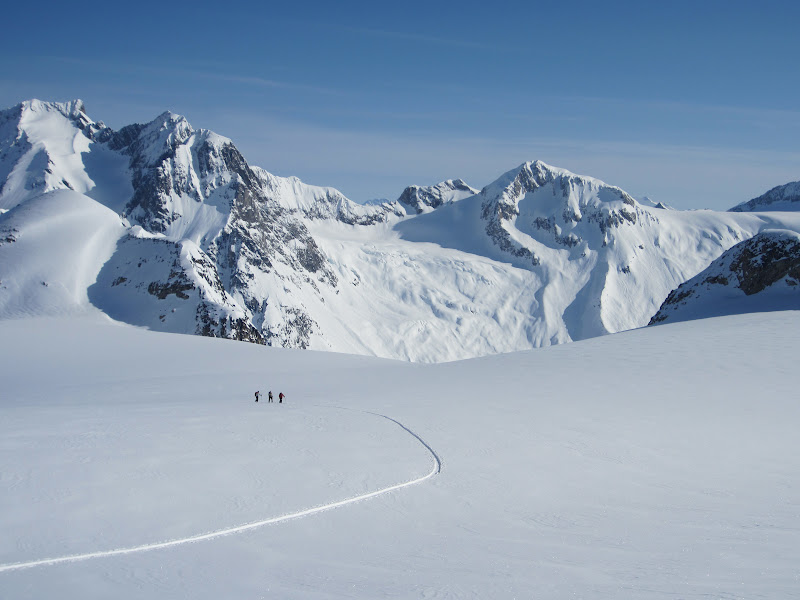 Skinning up to Campion in front of Virtue.

At the top of Campion bowl, we all were in awe of the view. Some girls wanted to rap down the front to practice their new skills, while a few of us were just amped to ski. Being our last day here, I was pretty set on skiing pow! As we dropped into to Campion, we were treated to the smoothest, easiest, and most fun powder turns I know about (I’m willing to test this theory out). The snow was literally the perfect density. We skied down hooting and hollering and then transitioned to head up to the top of “Espresso,” a run many of us had pointed at earlier that week. 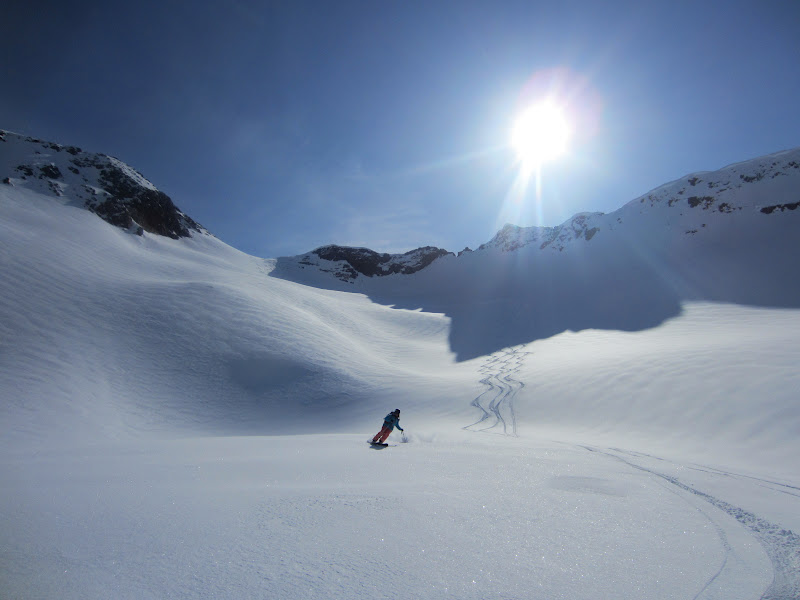 Nat making some turns on Campion. The snow was exceptional.

Heading up Espresso, the snow also looked amazing. We also spotted a few other enticing lines on our way up. We truly needed another month here! The run down Espresso was steep and fun. Anne let us open it up a bit at the bottom and we all tried to add our own style to the run which was fun. 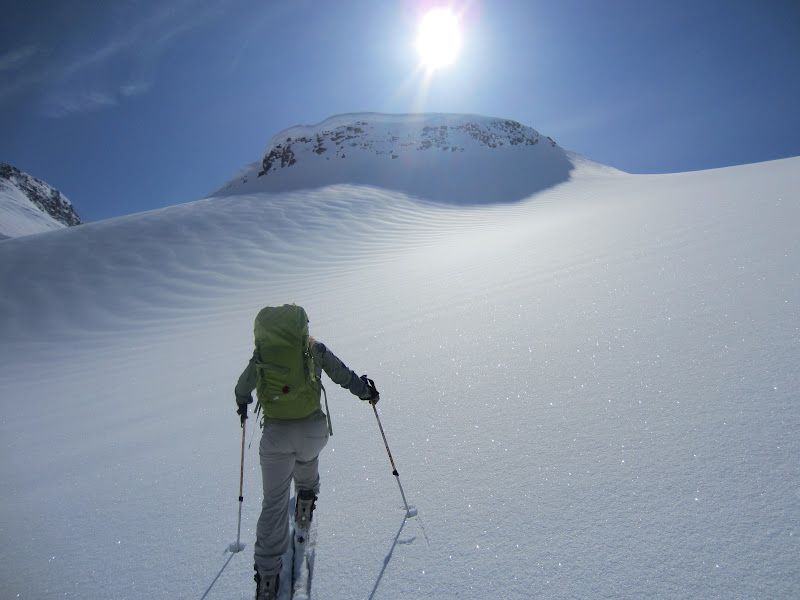 The snow looks so good! 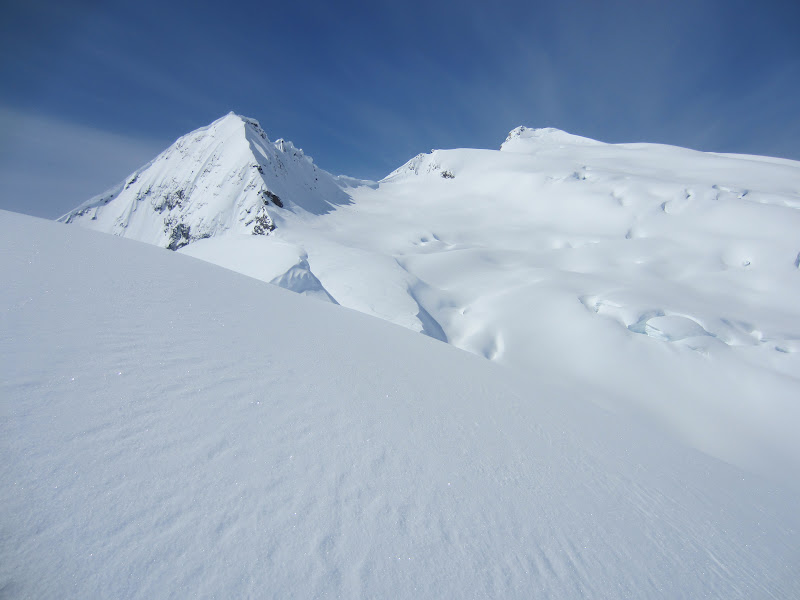 Justice, where have you been all my life? 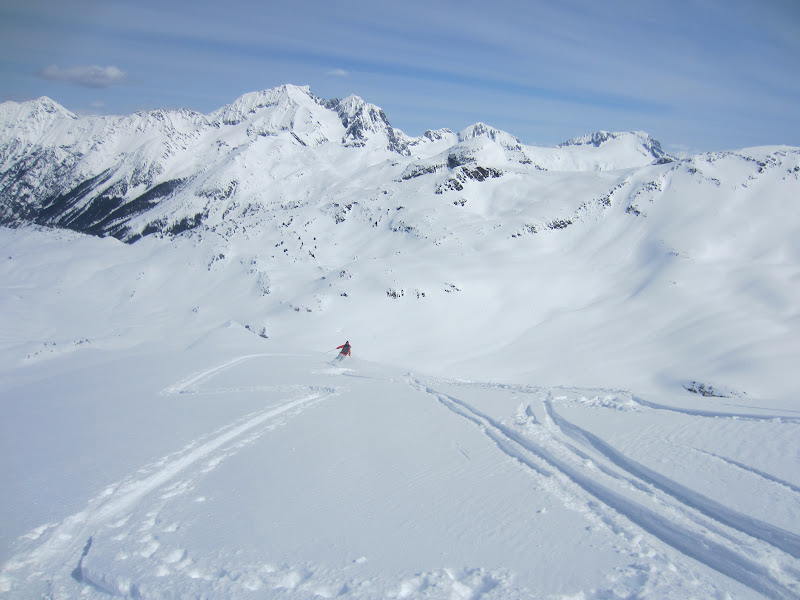 Yo, check her out, McKenna’s about to rip the sh** out of this line!

Mission accomplished. Our tracks on Espresso (photo by McKenna)

Anne said we had time for one more quick run. Knowing it was likely my last powder run of the year, I jumped at the opportunity to ski Devine Coll. Four of us headed back up to prolong our time at the lodge a bit more – even though it meant we needed a quick pace to the heli. A somewhat frantic skin as we could hear the helicopter approaching was probably the best way for me to the leave the Selkirk Lodge. No prolonged good byes. No chance to really think – we just schlepped gear and jumped in the heli – 10 seconds later, the lodge was out of site. 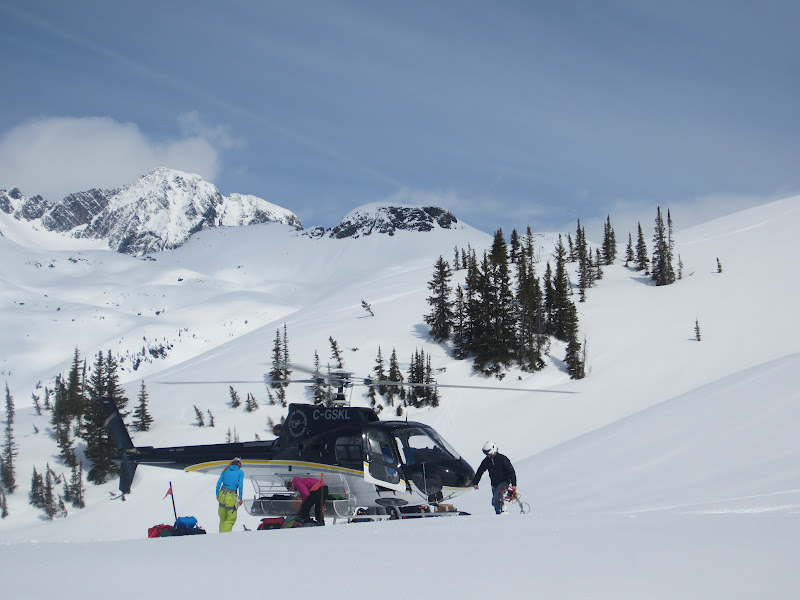 Quick, hide! It didn’t work. At least I got to ride in the front.

I’d like to wrap this all up, but it is really unfinished – even though the name of this event was Alpine Finishing School. This trip and experience transformed me. It made me want to be a better person and skier, dream bigger, and get radder. All of this is possible and the catalyst was the combination of SheJumps and the Selkirk Lodge – maybe we should change the name to “Anne Keller’s Radness Camp,” tagline: “Are YOU keen to fly Jesus at her?!?” Ok, that’s probably more of an unofficial name 🙂 Alpine Finishing School it is! Sign up next year!