So you heard (or experienced) all about the monster storms of the Sierra this winter bringing upwards of 800″ to some ski resorts.  That coupled with the lack of a true spring has left us an incredible snowpack well into June.  I had missed a lot of the epic June backcountry skiing because I was teaching at the community college, rafting, kayaking and getting educated in Swiftwater Rescue.  Although I had to be down in Berkeley for a bachelorette party on Saturday night, I felt like I need to get a ski in before leaving.  I hadn’t actually skied for almost 4 weeks!  Seeing a photo of a friend in front of the Crescent Moon chute at Roundtop, it was looking all time filled in, so I called up my friend Eoin who is a great skier with mountaineering skills and we were all set to head up there Saturday morning.

The skin out to Roundtop is convoluted, but we probably took the best route I’ve ever taken and we were at the base of the couloir pretty quickly. Here is a photo of Eoin approaching the couloir: 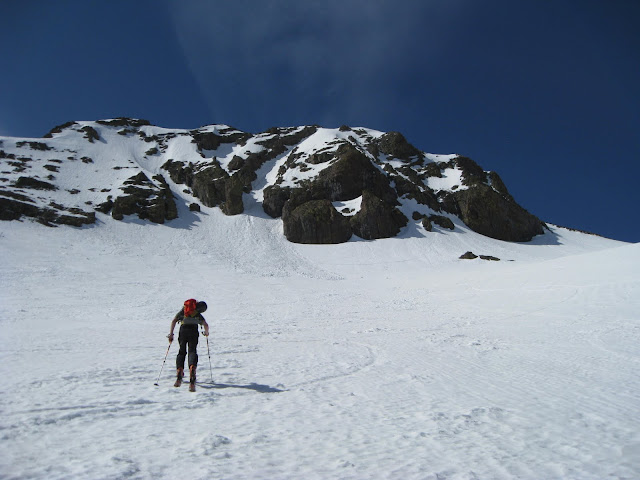 The couloir had definitely slid and was not the smoothest snow.  We wanted to boot up it to assess snow conditions, so we switched over to crampons and ice axes and headed straight up.  The snow was super variable – solid ice mixed with soft snow, mixed with breakable.  Weird!  Hopefully the sun would sort that out by the time we got to the top.  The boot was tough for that reason and it was awesome to have Eoin leading the charge through the sketchy top part.  We found some pretty rotten snow at the very top of the couloir which made us pause a little, but the hanging snowfield to skiers left had perfect smooth corn.  Going into this, I wouldn’t have thought I’d ever ski that snowfield because of the 200′ cliff at the bottom, but it looked to be the safest route now so we dropped in there, made two turns, and then got into the couloir.  I kind of butchered the ski, but I blame it on me being super cautious and the snow not being good… my goal for next year is to make more tele turns!  But it was definitely steep and required jump turns the entire way.  As predicted the most fun part was opening it up at the end and making GS style turns down the apron. 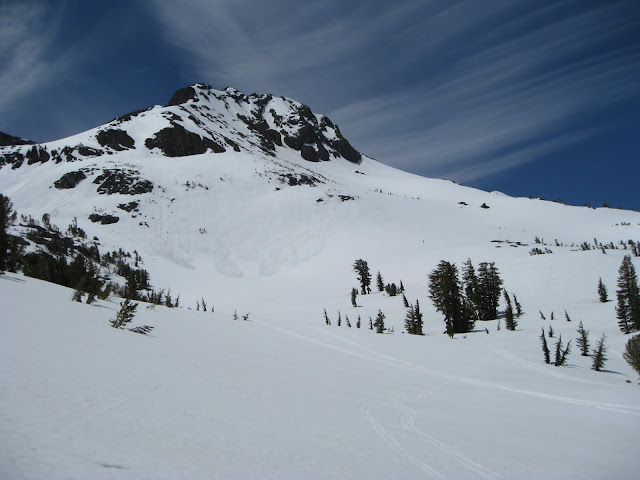 Video of the steepness:

We skied out of there to a car parked at Red Lakes via Elephants back and the snow was pretty sticky.  It is hard to remember that it is June with all of the snow.  Back to the car at 1pm, I headed down to Berkeley to meet up with my friends for a night of 80s attire and bachelorette props in San Francisco.   Here are some photos from that night courtesy of my friend Jme (it’s just easier to spell that way):

The next morning I woke up and went on a 40 mile road bike ride with my friend Tim around the East Bay.  It was such a fun ride with super diverse scenary and I can see why he loves riding road bikes in and around Berkeley.  My friend Lauren flew in from Tahoe and we had some delicious homemade mango salsa and margaritas in Tim’s backyard before heading out to see Florence and the Machine at the Greek Theatre.  Shows there are always amazing and Florence didn’t disappoint.  Always fun times with fun friends in the Bay Area!  And always nice to get down there after a long winter in the Sierra!